The aggregated crypto market hasn’t been able to capture the full momentum that Bitcoin has experienced in recent times. The flood of funding to Bitcoin suggests that investors are keen on being exposed to the potential upside offered by its growing status as a “hard asset.”

The benchmark cryptocurrency’s overt strength comes as it is flashing immense signs of bullishness against a bleak global backdrop.

Its popularity amongst traditional investors has grown greatly as well, as prominent Wall Street investors like Paul Tudor Jones have offered bullish outlooks on BTC.

All this has caused its dominance over the aggregated market to rise, with many altcoins seeing woeful performance against their BTC trading pairs.

This has led one analyst to note that a bout of capitulation could be imminent for these smaller digital assets.

Bitcoin’s dominance over the crypto market has been growing ever since the early-2020 uptrend began stalling in mid-February.

At this point, BTC’s dominance over the market was resting at roughly 60%, with the turbulence seen in the months following eventually leading it to yearly highs of 68% just last week.

This suggests that investors are fleeing what are perceivably higher-risk assets in favor for the benchmark cryptocurrency. Its global media attention stemming from comments from Paul Tudor Jones and others may also be playing a role in this trend.

Today, virtually all of the top 20 altcoins by market capitalization are trading down against their BTC trading pairs. 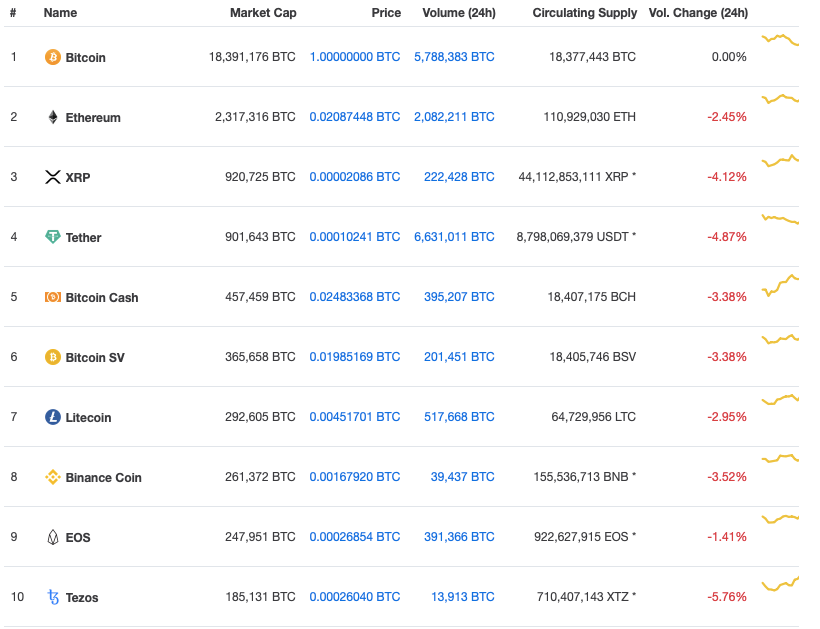 A similar trend has been seen throughout the past couple of weeks, as its recent push towards $10,000 has likely been driven by investors siphoning funds away from altcoins.

Altcoins May Soon Capitulate, Paving the Road for the Next “Altseason”

The long-awaited “altseason” has led to massive disappointment amongst investors, as many smaller cryptocurrencies are trading at multi-year lows against Bitcoin.

One pseudonymous crypto trader spoke about this in a recent tweet, explaining that he believes many altcoins will soon see capitulation.

He also notes that this could provide investors with “huge oppurtunities.”

“ETH heading for levels not seen since 2016. LTC trading below 2014-2016 prices. XRP heading for levels from 2014, 2016, and 2017. The alt market looks like it could capitulate soon. Seems like the worst is yet to come but afterwards should provide huge opportunities,” he explained.

Another trader echoed this sentiment, noting that he believes Bitcoin continuing to push higher as altcoins decline could provide the perfect conditions for “altseason.”

“I hope BTC keeps mooning while ALTS capitulate in the next few months because that would be the perfect conditions for altseason.”

Coinbase Report Suggests Bitcoin Acts as a Gateway to Altcoins
admin May 15, 2020